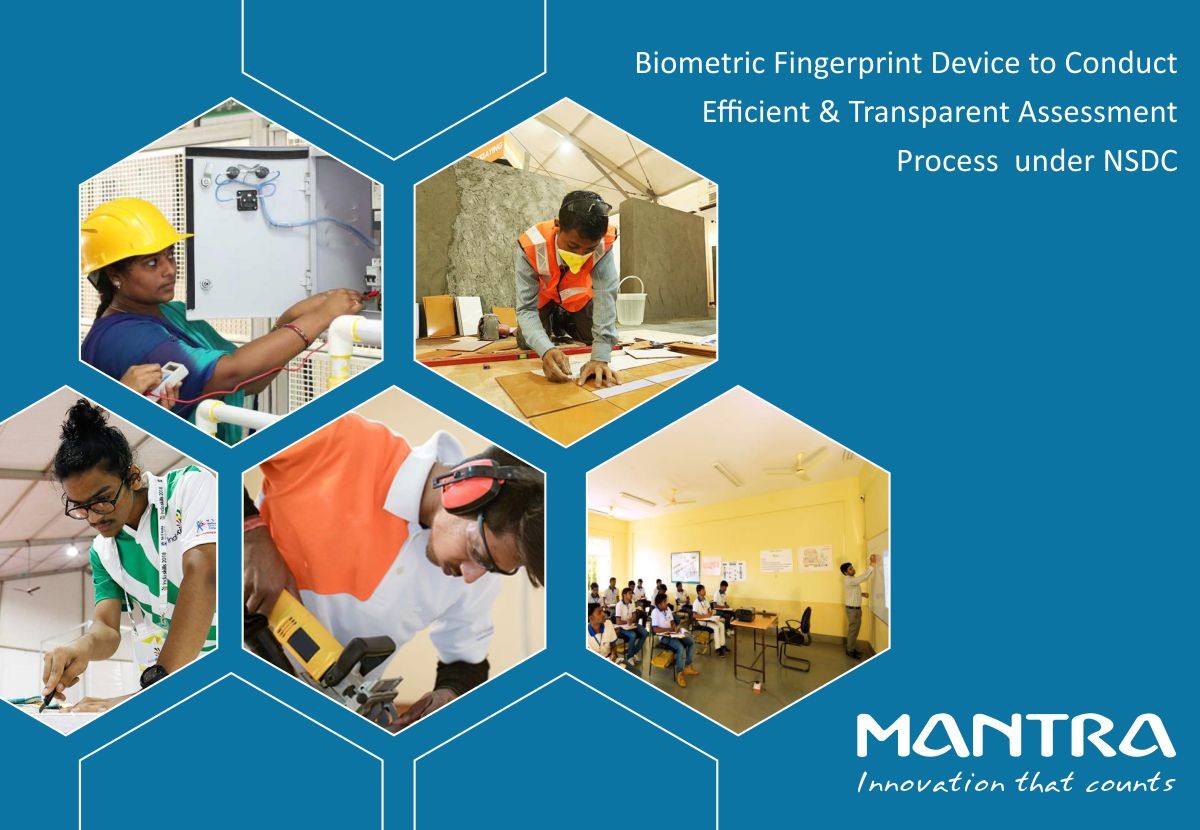 Biometric fingerprint scanner has much more than just the biometric identification of a personal. Everyday technological advancement transforms our world into the digital world by making tomorrow more flexible and assured. Biometric technology, dealing with the physiological attributes of individuals is being greatly brought into effective action across the globe for varied purposes and in diversified verticals.

Up to the present time, the Government of several countries has shifted towards cutting-edge biometric technology to enhance a sense of surety and safety while carrying out the registration, validation, authentication or authorization processes. The Indian Government has acknowledged the biometric technology a little while back and has laid the cornerstone of bringing it into service on a large scale.

As a great leap forward, GOI is increasing the utilization of biometric devices in numerous government flagship programs/social welfare schemes. The Pradhan Mantri Kaushal Vikas Yojana (PMKVY), Udaan, etc. are instances of such government-led initiatives employing the innovative biometric devices in an attempt to drive the process in a more reliable, efficient and secure manner.

Skill Development, PMKVY and the Role of NSDC

Since the economic impact of globalization is dawned upon the world, a strong connection has been drawn between the employment rate of a developing country and its economic growth. Throwing a light upon the condition of unemployment in India, the Centre for Monitoring Indian Economy (CMIE) reckons the unemployment rate at around 6.68 percent up till March 2019.

Furthermore, the observation says that unemployment rate drops down to under 2 percent for a class of people above 30 years of age. This suffices that one of the major concerns in India is the unemployment of the youngsters and this is where the government endeavors to emphasize by rolling out PMKVY. Interpreting the unemployment rate, one can be present it as the sum total of unemployed people striving for jobs divided by the participation rate of the labor force.

PMKVY is a skill development related training certification program that concentrates on offering skill-based training/coaching to the youth citizenry of the country for assisting them in acquiring jobs. For this purpose, training centers (TC) are built in multiple states and cities to impart specific skill-based development training to the candidates/applicants with the aid of NSDC.

The National Skill Development Corporation (abbreviated as NSDC), set up by the Ministry of Finance under Section 25 of the Companies Act, is a non-profit establishment that functions to foster skill development related training with the combined efforts of private-sector partners. NSDC targets to achieve the object of boosting skills of approximately 150 million populace of the nation by 2022 through suitable Public-Private Partnership (PPP) models.

In short, NSDC under the directions of Ministry of Skill Development & Entrepreneurship (MSDE) has initiated a scheme that encourages ambitious youth of the nation to enroll for the corresponding skill training & the assessment program with the help of an online ‘Skill India’ portal. The ultimate goal is to increase employment possibilities for the youth.

What is Aadhaar Enabled Assessor Application?

One of the backbones of NSDC is Sector Skill Councils (commonly known as SSC) that play a key role in narrowing the gap between India’s skill-based ecosystem and the increasing demand of trained workers in the industry. The training as well as the assessment of the applicants registering for the skill-based development scheme is to be carried out by the assessor of the respected training center at the concerned location.

In a bid to flourish a systematic functioning of the training centers, Skill Development Management System came into existence, which is a one-stop platform specially designed for the assessors, HR and recruitment staff to store all the information of the applicants/candidates.

MSDE along with NSDC and PMKVY has set in motion NSDC’s Skill Development Management System (SDMS) to create an application “SDMS Assessor App”. The App is formed for facilitating the assessor to watch the list of allocated batches, to carry out a smooth evaluation of the candidates and to note down marks of the assessed batch.

Furthermore, the App will assist in maintaining track of all the batches allocated to the assessor and allows keeping an eye over those batches whose assessment or evaluation was missed by the assessor.

In an attempt to enhance transparency and assist in effective monitoring of PMKVY program, NSDC has launched the Aadhaar enabled SMDS Assessor App, to be used by the Assessor utilizing biometric devices.

Integrating biometrics with the App will allow the assessor to conduct an assessment process in a more accountable way at the training centers as it will authenticate an assessor through a Biometric Fingerprint Scanner Device.

Additionally, biometric fingerprint scanner will provide a functionality/solution of authenticating the Assessor who visits the training center premise, and helps in geo-tagging of TC location. This will allow the real time monitoring of the process by the relevant authorities/stakeholder on the day of the assessment.

NSDC has suggested all the training centers to utilize Biometric Fingerprint Device offered by Mantra Softech, for efficiently carrying out enrollment and to assist an assessor to successfully conduct an assessment process at training centers. 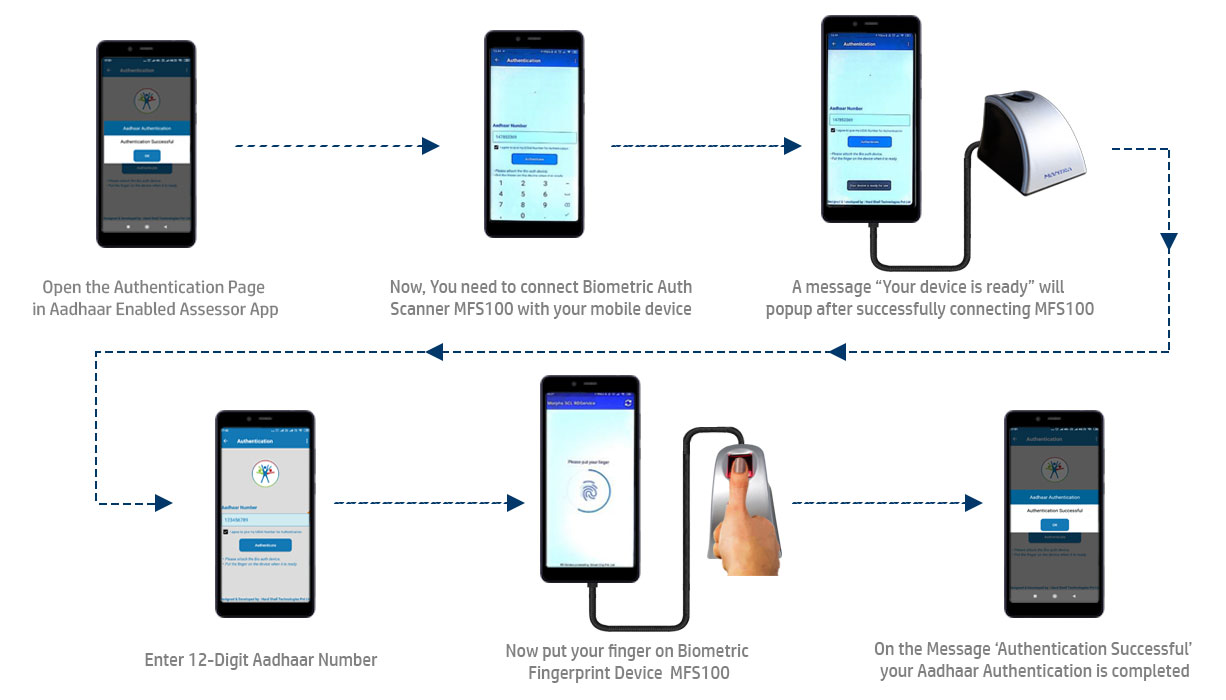 Step 1:- The first-time users need to install the ‘SMDS Assessor App’. Go to the Authentication page and the Aadhaar Authentication pop-up window will show up. Click on ‘OK’ button.

Step 2:- Now, the biometric fingerprint device for authentication will be required to connect to the mobile device in which the Aadhaar enabled Assessor App is installed.

Step 3:- After connecting the biometric fingerprint scanner with the mobile, a message “Your device is ready for use” will pop-up on the screen.

Step 4:- Next, Aadhaar Number of the user shall be entered and the checkbox “I agree to give my UIDAI number for authentication” shall be tick marked.

Step 5:- A message will appear to place a finger of the user on the biometric authentication device to capture his fingerprint image.

Step 6:- On Successful authentication, an alert message will be displayed. Click on ‘OK’ to proceed further and complete the authentication process.

Mantra’s biometric fingerprint device MFS100 or MFSTAB is well-suited for efficiently and accurately carrying out the authentication process within a few seconds via SMDS Assessor App.