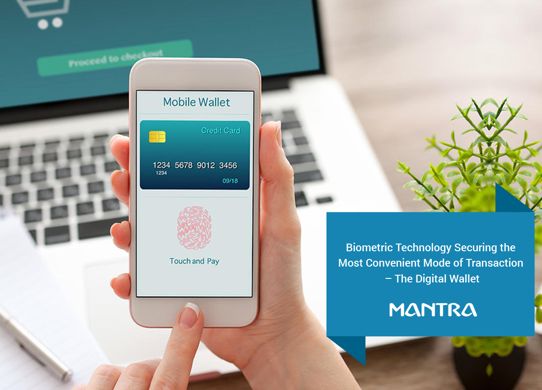 With the adoption and proliferation of smartphone devices, the digital transaction/payment market has undergone far-reaching shifts. A large chunk of the populace is utilising mobile phones to conduct transactions with ease & convenience. In effect, India’s digital payment industry manifested two-figure value growth during the period 2013-2017.

From recharge & bill payment, entertainment, food & travel payments, city services like making a cashless donation to mall shopping and much more, the digital wallet permit a user to make instant payment online without the requirement of making a payment in cash or through plastic cards.

Moreover, the constant need for changing passwords or PINs with a safer alternative has laid the developing & developed countries to adopt biometric technology as a feasible solution for secure digital transactions/payments.

As per the Reserve Bank of India, from only one in 2006 up to sixty in 2017, the number of enterprises offering digital wallet services has swooped up stupendously.

After smartphones have gained dominance over the world and became an internet access control tool, there has been a tremendous increase in global online commerce & payment industry. A digital wallet is an online financial service providing platform which encourages ‘cashless payment’.

With the introduction of Apple Pay in autumn 2014, the world observed an emergence of digital wallet space for in-store payments. However, the conception of digital wallet persists since the commencement of the e-commerce industry. To support the first massive online marketplace eBay, Paypal has created a digital wallet as a mobile accessible payment system.

The Way Forward for Digital Wallet in India

Before the Digitization, cash payment was the prefered mode across the nation. In India, 95% of the transactions were through cash before the demonetisation. However, after the demonetisation, digital payment acceptance increased drastically in India.

Consequently, during 2013-2017, Indian mobile wallet market witnessed a steep rise with a CAGR of 67.10% despite compulsory KYC rules.

BHIM UPI App is the best instance of a stringent digital wallet having the potential to power several bank accounts, to support seamless routing & merchant payment onto a single digital platform with enhanced biometric security.

So far, 85% of consumers have installed the digitals wallets & fintech apps to make instant online payment without a hitch. Furthermore, every month, the country witnesses a 30% rise in the number of digital transactions.

The Future of Biometric-led Digital Wallets

Are you scared of utilising digital wallets or are you afraid of falling into the trap of fraudsters? Thanks to Biometrics because you do not need to worry any longer. With the embodiment of the state-of-the-art & secured biometric technology, it’s time to strengthen the Indian payment ecosystem.

Furthermore, BHIM App is developed based on Biometric technology designed for merchants so that they can validate & identify the user based on his physical attributes like fingerprint impression.

Additionally, the financial institutions are extensively using Aadhaar based payment system (AePS) for providing secure banking & financial services to the account holders with the aid of biometric fingerprint scanner or iris scanner.

Praveen Dadabhai, CEO of a wallet company ‘Payworld’ said: “Even though the KYC process was a pain point for the industry we were able to manage it because of Aadhaar biometric based verification.”

The Benefits of Utilising Biometrics in Digital Wallet

Secure enrollment of the user/consumer

Keeps away the fraudsters