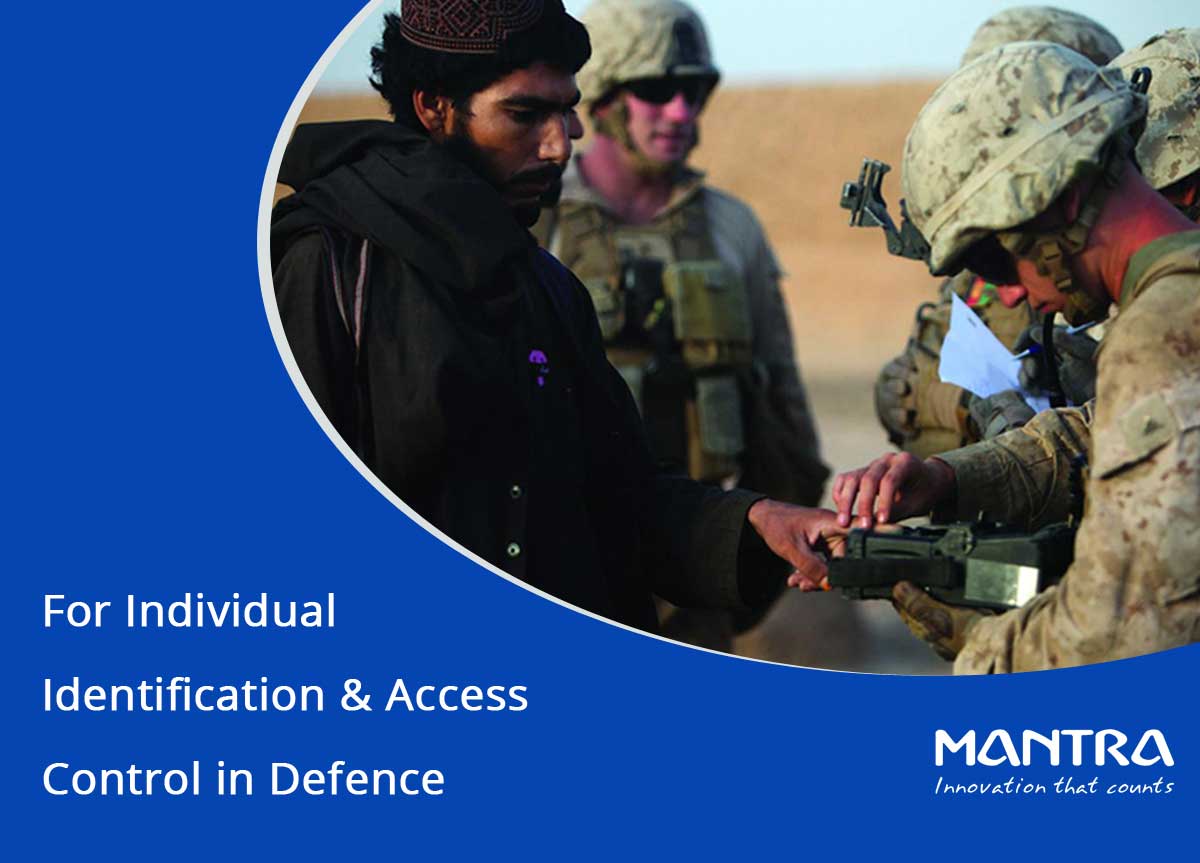 In today’s era when we talk regarding innovative technologies, biometric recognition technology is considered to be one of the most advanced technologies in the 21 century. However, Biometric technology is currently acceded to by various sectors around the globe. It is highly utilised in the defence & intelligence sector as well.

In the current era, we have gained access to the new generation technologies like biometric identification, intelligent sensor technologies, & video capturing/recording or video streaming analytics to devise the cutting-edge security solutions for army forces. Among various new technologies embraced by the defence sector, biometric technology anticipates altering the way the military manoeuvres are carried out.

Increased concerns regarding national security, security of the army forces and monitoring of individuals have led visas, border-crossing records & passports to be linked with biometrics.

The defence intelligence is eminently focusing on the insurgencies & the rising threat of terrorism. It can help the military officials in adopting the latest technology to distinguish between a friend and a foe.

Biometrics on the Rise

Time after time, a safety & security aspect has become mundane, especially amongst the defence sector when the question is of the security of Army forces & the national security. Biometric technology has been utilised most frequently in the defence & intelligence mainly for recognizing the identity of a person and restricting the access of an unauthorized individual to the physical spaces within the confined area of military forces.

In the industry, biometric fingerprint scanners, widely deployed in electronic devices, premises security, citizen identification, time monitoring and many more areas, due to its portability and reliability. Apart from this, most talk about technology in the tech world “facial recognition sensors” is a common feature in upcoming smartphones and also, in various other devices.

Various biometric modalities are helping variant sectors in restricting the access of a person to sensitive places or confined areas. The futuristic technology can also help military officials in collecting and storing the biometric data of International cross border intruders.

For boosting the security of military forces or enriching public safety & national security, the federal agencies of developed countries are planning to shift towards the enactment of biometric technology to eliminate fraudulent activities.

As per Feb 2019 reports, the U.S. Department of Defence (DoD) has signed the contract of $2.42 million to develop the system of behavioural biometrics as a part of assured identity initiative to replace the traditional ID card system at the workplace.

Earlier in the year 2018, William Graves, the chief engineer for Program Executive Office Intelligence, Electronic Warfare & Sensors said that “Huge advances in biometric collection and database query are now being made with more to come on the horizon”.

The utilisation of biometrics in defence & intelligence is not just limited to two or three purposes, but it is blessed to provide numerous applications for securing variant military tasks or actions. Majorly, two applications of biometrics in defence seem to be essential: identification and access control. It will not only protect the armed forces or help in smoothing the military activities, but also will maintain the balance between civil liberties & national security.

The method of recruiting army forces is pivotal and hence the implementation of an accurate, reliable & sturdy technology becomes pretty apparent. That is why biometric fingerprint scanner, iris sensors, facial recognition systems or the biometric device of any other modality shall be employed to validate the identity of the candidate / applicant.

Biometric recognition is a secure procedure of capturing the physical traits of any person such as fingerprint, iris, facial image or palm vein impression and matching them with the previously stored data of an individual.

Biometric devices or scanners get their real calling in as it accurately identifies the individuals based on their physiological attributes. Therefore, it can help in quickly recognizing a militant and to know if the opponent or foe has disguised to penetrate through military forces or any of the national security agencies when his biometric data will not be found in the records.

Implication of Biometrics in Developing an Efficient Access Control Solution

In the current era, the utility of biometrics is necessary, as a mechanism to protect the classified information, military establishments, safeguard variant operations of the armed forces and in regulating the access to physical military spaces.

Biometric access control systems, exercising the fingerprint, face or iris scanners have the capability of restricting the access of an unauthorized person or foe who is making an effort to intrude within the enclosed premises or restrained area of troops/militants space.

Biometric technology can deliver a robust, scalable, high-performance and off-the-shelf access control solutions to the militants, navy, air force or any of the defence agencies. Biometric access control system guarantees a better security screening process which will allow the legitimate person only to enter highly secured military-related fields or places.

Apart from it, biometric technology helps the government of any country to lay restrictions on the entrance of antagonists and if biometric data of them are already stored then even in identifying the intruded person. Furthermore, it can allow the border control officials or authorities to improve the border control intelligence by optimizing real-time data of the intruders.

Merits of Biometrics in Defence

The benefits of implementing biometrics in defence and intelligence are manifold, but let us have a look at some unavoidable and considerable merits:-

Accurate identification of the military personnel to recognize any unidentified encroachment.

Can help in improving national security.

Identifying an individual (Army personnel and civilians) at border areas.