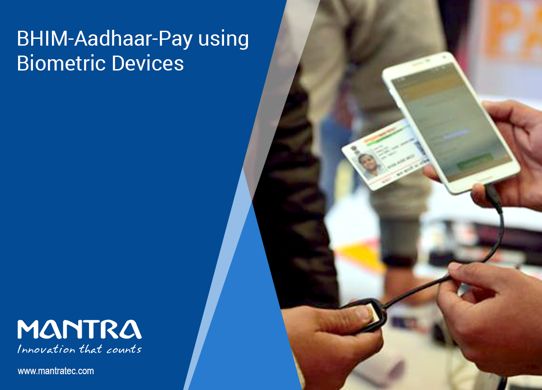 There is a lot of buzz across the nation about the digital payment system. On that account, the government is focusing to build a better digital infrastructure through a ‘Cashless India’ project. Besides, the government portal itself proclaims a turn of phrase – “Faceless, Paperless, Cashless” for encouraging the ‘Digital India’ program.

In an effort to encourage cashless system by adopting a reliable mode of digital payment system, multiple digital payment modes have been incorporated, ranging from Aadhaar enabled Payment System (AePs), Point-of-Sale (POS), Unified Payments Interface (UPI), Micro ATMs to BHIM Aadhaar Pay. However, the penetration of Aadhaar-linked mobile wallets steals the show for it is opening a gate to a seamless payment method of validating the client through biometrics.

As per the reports generated by NPCI in the year 2018, after the execution of Aadhaar deployed mobile wallet BHIM payment gateway, a hike of INR 1 trillion is spotted in the digitized mode of transactions as compared to the year 2017.

What is BHIM Aadhaar Pay?

BHIM Aadhaar Pay, a GOI led project was pioneered under ‘Digital India’ program in the year 2017 to form a flawless computerized payment system in the nation. The National Payments Corporation of India (NPCI) – an institution controlling the retail settlements in India has instigated BHIM Aadhaar Payment Method as an Aadhaar based gateway interface for carrying out secured transactions.

To sum up, BHIM Aadhaar Pay is a mobile App, formulated for the vendors/merchants to accumulate transactions from the purchasers digitally in a more secure approach through biometric fingerprint validation. It is easy as pie for the vendors to regulate and keep a track of the payments received from the clients, preventing them from any frauds or faults in transactions.

BHIM Aadhaar Pay facilitates the merchants with a manifesto through which they can obtain the payment amount from the purchaser over the counter in the trade-off of goods or services. The process involves verification of the buyer through biometric fingerprint device. Furthermore, it enables the merchants to acquire transactions from buyers/consumers who are willing to pay money by utilizing their biometric fingerprint impression & Aadhaar number.

What’s more, that BHIM Aadhaar App has to offer is, it entitles the vendors/merchants to bind their bank account with the BHIM Aadhaar Payment App for fruitfully getting the payment from a consumer irrespective of his bank.

BHIM Aadhaar Pay – Beneficial for the Vendors and Clients

The dealers over the country are looking for an effective and quick computerized installment mode for getting transactions carefully from the clients by offering their merchandise and services. On the other end, the clients are too searching for a payment mode that will not require the need for trading cash or utilize plastic cash cards. And hence the BHIM Aadhaar Pay App comes into the play, which fulfills the prerequisites of both the dealers and the clients, making both of them cheerful & satisfied.

A vendor who is willing to utilize the BHIM Aadhaar App can be a shopkeeper, a retail store owner, restaurant owner and anybody who can sell products and services. Additionally, a vendor gets a lot of benefits under BHIM Aadhaar Merchant Incentive Scheme, just like the shipper enlisting himself as client of BHIM Aadhaar will get an incentive of 0.5 percentage of the transaction value.

This implies a dealer can get an incentive for each transaction which can have a least incentive sum of INR 2.00 and maximum incentive sum of INR 50.00. Over the incentive scheme, vendors get advantage of selling its products and services through a biometric fingerprint verification method which directly transfers amount into his bank.

The clients on the other hand, make the foremost of BHIM Aadhaar App as they do not have to be dependent on cash or plastic cards for making a payment for goods/services. Furthermore, the two-factor confirmation i.e. Aadhaar number and biometric information give a sense of security and safety to the clients while selecting BHIM Aadhaar digital payment mode.

The world has been changing at a rapid pace with the digitization, making a shift in the Indian economic sector. The developing and the developed countries round the globe has been adopting the innovative biometric technology, bringing revolutionary change in a way digital transactions are carried out.

The fingerprint sensor device for BHIM Aadhaar Pay is a pre-requisite as it enables a person to make payment digitally by simply sharing his Aadhaar number and verifying through fingerprint scanner device. This is especially useful when the customer is running out of cash or card and is willing to purchase the product.

Merchants can obtain payment digitally for the goods and services purchased by the customers in a secured manner.

Furthermore, the merchants can efficiently regulate and control the payment received from the customers.

On the other end, for the customers digital payment through BHIM Aadhaar Pay is the most convenient and safest process as they do not require carrying cash.

All a customer requires for purchasing any goods/services from the stores enabling BHIM Aadhaar payment App, is an Aadhaar number and their fingerprint impression.

The merchants and customers can get the benefit of the most reliable digital payment process as it collects the biometric fingerprint details of the customers.

BHIM Aadhaar payment can save the customers from falling into problematic situations such as misplaced card or lost cash at the time of purchasing goods/services.

The Infrastructure Required for Digital Payment through BHIM Aadhaar Pay

A merchant who is willing to adopt BHIM Aadhaar Payment mode for error-free, rapid and seamless digital transaction from the customers for the services and goods he provide, will require the following set-up:

Merchant’s bank account shall be linked to his Aadhaar card.

Android smartphone (with android version 4.4 or above) or any other registered device such as Tablet, kiosk, Micro-ATM, POS, mPOS, etc with strong internet connection.

BHIM Aadhaar Payment App to be installed in the registered device. The App will easily be available from the Google Play store.