Home / Blog / What are the Advantages of Using Biometric De-Duplication? 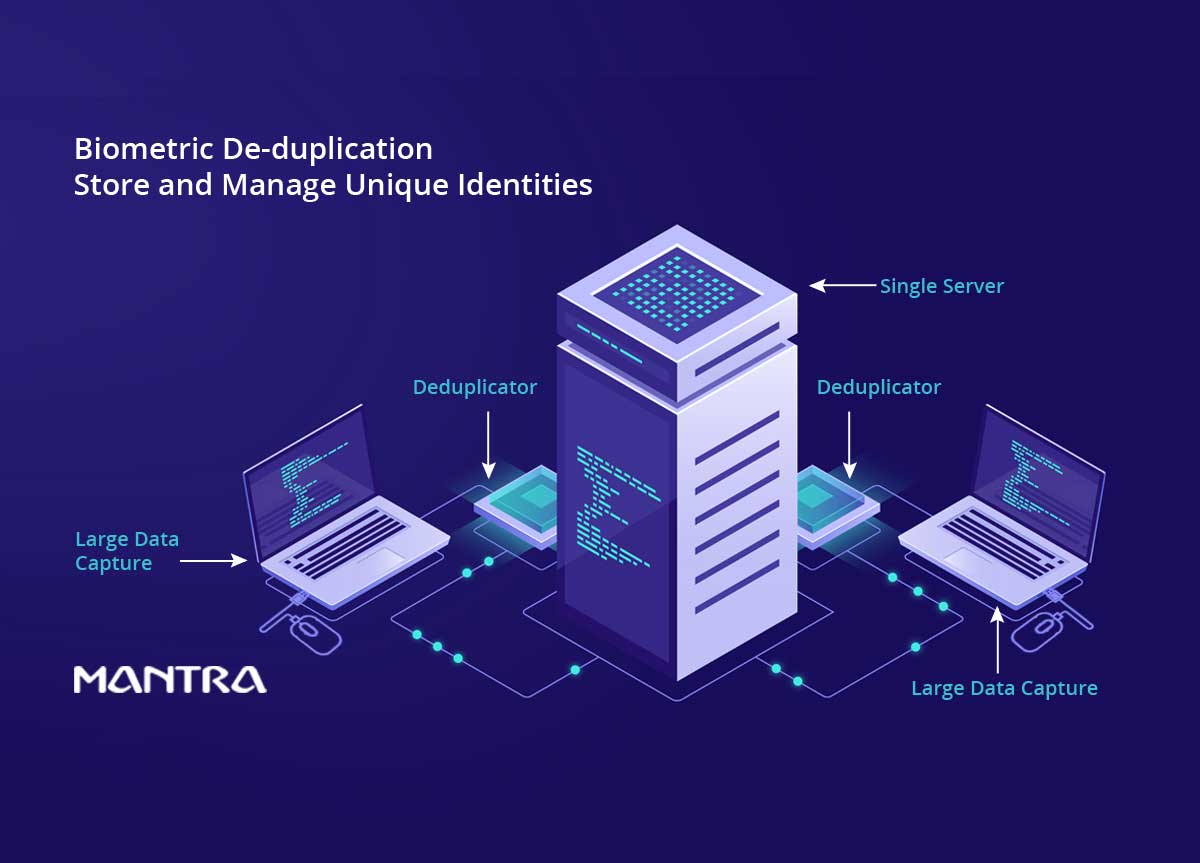 Biometrics has emerged as the twenty-first-century technology of identifying/recognizing humans. It recognizes humans on the basis of their physical attributes like fingerprint palm-vein facial and iris. An individual identification system has two major operational stages: ‘enrollment’ and ‘identification.’

Enrollment process: A person’s biometric data template will be captured efficiently and saved in the centralized database.

When individuals are enrolled multiple-times in public service program and have multiple identities, it is known as identity duplication. It is an incident where fraudsters create duplicate identities to receive the benefits from various government programs multiple times (especially welfare disbursement schemes), or it can be an unintended mistake occurred during the enrollment process where an individual’s data is entered a couple of time in the system, resulting in duplication of identity.

To solve the issue of identity duplication, the next-generation biometric de-duplication technique can appear as a turning-point for large-scale public service programs, enabling efficient creation of unique identities and removal of duplicate identities from the system.

What is Biometric De-Duplication?

Biometric de-duplication is the procedure of creating and managing the unique identity of personal in the system. Probably, the system may have stored multiple identities of the single individual under distinct ID proof. Thereby, it becomes crucial to eliminate the duplicate entries from the system as it ensures that the same person or citizen does not get enrolled again with other identity proof.

How does biometric de-duplication work?

For the biometric identification system to be efficient and reliable, it must be able to store up a single unique ID of a registered person in the database. The biometric de-duplication system matches the biometric record of anyone getting enrolled for the first time utilizing fingerprint, facial, and/or iris recognition with stored biometric data.

In De-duplication process, if duplicate entries are found, then all those entries will be removed from the system and single unique identity of people will be saved in the database.  A simple illustration of de-duplication is given in the Figure below.

For instance, if biometric data collected from distinct locations and various systems are to be merged in a centralized system, then it is necessary to eliminate duplicate entries/identities from the system. This can be done with Mantra’s MULTI MABIS biometric de-duplication module. MULTI MABIS can recognize the duplicate entries from 1 to 10 lac database in just a couple of seconds.

In India, GOI floats various flagship social welfare programs to benefit citizens and to make basic social amenities, services, or rights accessible to citizens at different stages of the individual lifecycle. A Unique Identity (UID) assigned to citizens supports the government in imparting the benefits of welfare disbursement schemes or public services to entitled/intended beneficiaries.

With increasing incidents of identity fraud, the governing bodies require a robust and reliable system to identify an individual uniquely. Biometric de-duplic ation system can help the government in the issuance of voter ID card, driving license, passport, ration card, birth certificate, PAN card, etc. Thus, with the implementation of biometric de-duplication system, the government can bring transparency in the execution of social welfare schemes such as MNREGA, Ayushman Bharat Yojana, Targeted Public Distribution System (TPDS) and many more.

Where can it be used?

Recently, GOI has rolled out ‘one nation, one ration card’ system to provide beneficiaries with a single ration card which will be held valid nationwide. This step is mainly taken to get away with the chance of an individual holding more than a ration card to enjoy the perks from several states.

Biometric de-duplication system can assist the government in enrolling beneficiaries on a central system and identifying duplicate entries in case person is enrolled multiple times from different states.

Similarly, for a large-scale biometric project like voter ID issuance where data of millions of citizen is needed to be stored and verified to issue a unique voter ID card, biometric de-duplication system becomes requisite to eliminate duplicate identities or records from the database.